Riverhawks Avoid Sweep to Stay in the Playoff Hunt! 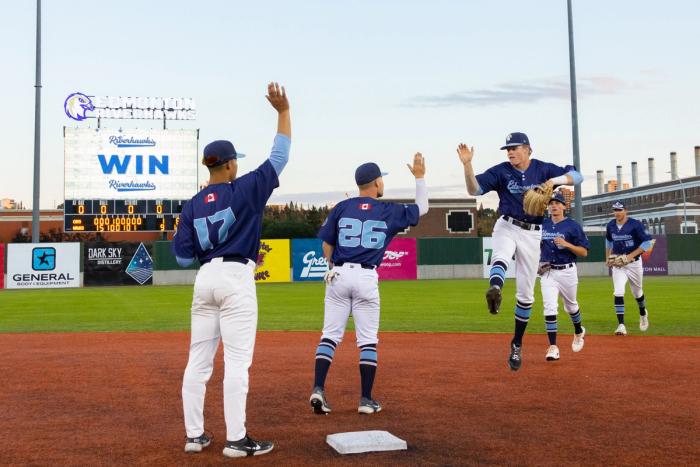 The Riverhawks were held scoreless for the first seven innings of the game, but they finally got on the board after Alex Stinnett scored Tom Poole off a sacrifice fly. So, down 2 runs all efforts were focused on the comeback in the 9th.

Leading off, Will Gardner worked a walk off a full count after fouling off 4 balls, followed by pinch hitter Mark Ossanna smacking a double that put both runners in scoring position. With the go-ahead run at the plate, Aaron Stinnett would walk to load the bases. Clayton Loranger then grounded into a fielder’s choice, scoring Gardner to bring the Hawks within a run. Then, with the leading run on first, Kelly Corl would crush a bases-clearing triple, scoring both Loranger and Ossanna to take the lead. From there, Tom Poolewould hit an RBI double, and Alex Stinnett would plate Poole on an RBI single making the score 6-3. As a result, Cameron Liss would be tasked with closing out Port Angeles in the bottom of the 9th.

Certainly, Liss would do just that only allowing a leadoff single, then shutting down the next 3 batters. Liss pitched 2 full scoreless innings allowing 2 hits, walking none, and striking out 3 of the 8 batters faced. The bullpen shutting batters down was what allowed Edmonton to get back in the game, and ultimately win this game. Brendan Loeppky would also came in to pitch a 3-up-3-down bottom of the 7th.

This game was tough for the Riverhawks early as starter Riley Barrett gave up 1 run in the 1st inning and another 2 runs in the 2nd putting the Lefties ahead early. Barrett would pitch 6 innings overall, allowing 3 runs on 5 hits, 1 walk, and striking out 7 of the 24 total batters he would face.

The Riverhawks now sit tied with the Wenatchee Apple Sox at 13-11 for the division lead with the Victoria Harbourcats only .5 of a game back at 13-12. So, with the division lead hanging in the balance Edmonton will travel to play Victoria in their final series of the regular season. The hunt for the playoffs all comes down to the last games of the season so sit down and buckle up fans because we are about to watch some incredible baseball.

Looking for play by play updates on every game home or away? Be sure to follow @RiverhawksGames on Twitter. Looking to stay as updated as possible? Be sure to read our game preview and game summary right here at riverhawksbaseball.com.