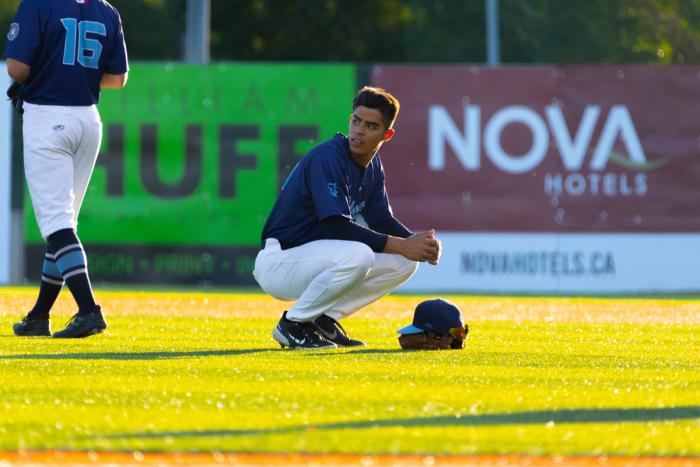 The Edmonton Riverhawks were within reach of a comeback in the 9th inning, but they were shut down by the Port Angeles Lefties. Having a pair of runners on base after a pair of four-pitch walks, the Hawks got one run across off a Tom Poole double. With the tying run at the plate, Emiliano Gonzalez knocked a sacrifice fly to allow Kelly Corl to cross the plate, but with two outs they couldn’t stretch the rally any further losing 5-3 to the Lefties. This gives Port Angeles the edge on the season series, and has cooled the Riverhawks’ hot streak heading into August. With one more game in Washington before the Hawks head to Victoria, a win will be imperative to stay competitive in the tight playoff race.

Tonight the Riverhawks out-hit the Lefties, but were once again bit by the LOB bug, stranding 11 runners including a bases-loaded one-out situation in the first inning. The Lefties struck early, scoring their initial three runs in the first off starter Brady Kobitowich. After the short two-out rally by Port Angeles in the 1st, Kobitowich settled down for an incredibly solid start. Brady pitched a total of 6 innings, his longest appearance of the season, and struck out 8 Lefties. After the 1st Kobitowich only have up a pair of hits in the 4th and a pair of walks in the 6th. Michael Gill took the mound for the 7th and 8th innings, and while his first inning was a 10-pitch beauty, a pair of walks in the 8th came back to haunt Gill as they both scored off another two-out double. Those runs would be the difference makers, as while the Hawks could get their score to 3 in the the 9th, the last minute insurance kept Port Angeles on top.

The penultimate series finishes up tomorrow at 7:35pm MST in Port Angeles. As the AppleSox won tonight, the Hawks will need to stay competitive against the Lefties tomorrow night, not only to balance out the season series, but also to get back atop the division standings. Tough competition also comes from the Hawks’ Friday opponents, the Victoria HarbourCats who also won, hopping a game up in the standings over Edmonton.