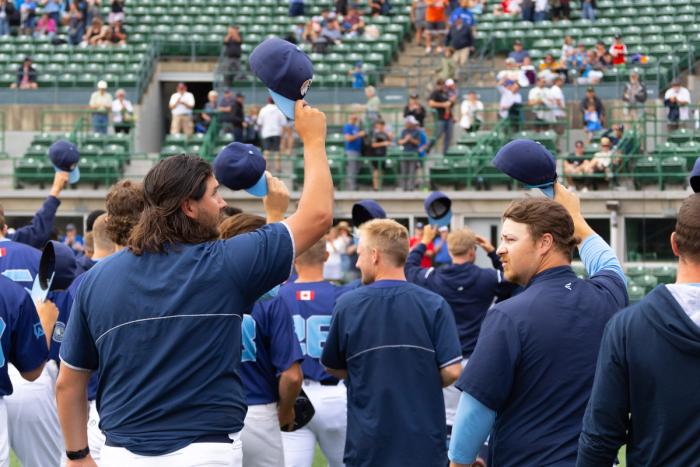 Victoria Edges Edmonton in Win & You're In Game

By Dayton Abbott and Cody Schmidt

The Victoria HarbourCats broke the hearts of the Edmonton Riverhawks and their fans winning the winner-takes-all final game of the season 3-1.

The Hawks fought through the whole game and had a great chance in the 9th with a pair of runners and no outs, but three straight strikeouts spelled Edmonton's demise.

Edmonton opened the scoring in the top of the 4th, off Emiliano Gonzalez's ground rule double that rolled under the left field fence. The Riverhawks scored just the 1 run as, after a strikeout, Gonzalez was gunned down trying to steal 3rd followed by an Austin Chouinard pop fly out.

Victoria doubled Edmonton’s score in the bottom half of the inning, putting up 2 courtesy a double and a run scoring on an error from a thrown away a pickoff attempt at 1st. The Cats built on their lead in the bottom of the 5th, adding an insurance run off an RBI single.

Victoria starter Nick Taylor had a fine outing, allowing 1 run on 5 hits, walking a batter, and recording 5 strikeouts in six innings of work. For the visitors, Edmonton starter Brenden Wabick would cover 4 innings, allowing 2 runs on 4 hits, 2 walks, and 3 strikeouts.

Victoria relievers Ben Smedshammer and Jack Seward closed out the final 3 innings, combining to allow no runs anmd giving up 1 hit while walking 2 and striking out 6 of the last 12 batters they faced. Kyle Poapst and Riley Barrett threw the last 4 innings for the Hawks. Together, they would allow just 1 run on 2 hits, 5 walks, and 4 strikeouts.

Edmonton’s season came to an end while the Harbourcats will now play the Bellingham Bells in a best of 3 series in the playoffs.

The Riverhawks finish the season with a 25-28 record, coming in 2nd place in the second half, and 5th place in the overall North Division standings.

Clayton Loranger led the team in hitting, finishing with a .365 average, which ranked him 4th in the entire West Coast League. He added 30 RBIs. Ivan Brethowr led the squad with 5 home runs on the season. Mikie Gill had the most pitching wins with 4, only one of which came from a start. Brady Kobitowich had 38 strikeouts to lead the team while the best ERA belonged to JD Callahan, with a 1.00 ERA over 27 innings of work.

We thank you for pulling for the Riverhawks during our inaugural season. We look forward to creating even more memories as we move forward together!