Dramatic Victory Against Victoria Leaves Riverhawks A Win Away From Playoffs 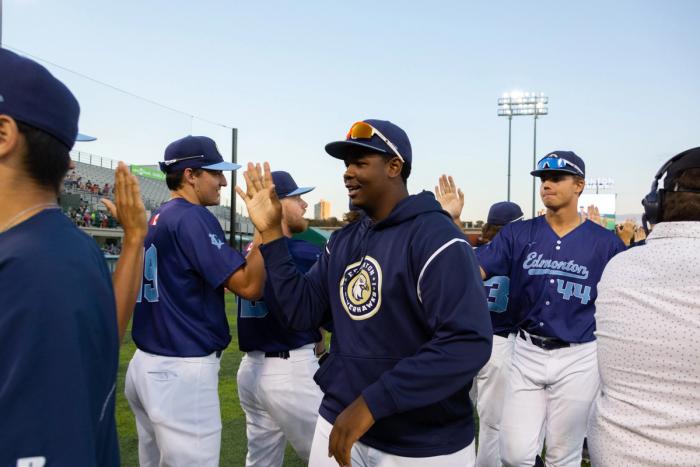 What originally had potential to be a blowout turned into the Edmonton Riverhawks fighting beak and talon to pull off a 9-8 win over the Victoria HarbourCats. A disastrous bottom of the 7th let the HarbourCats tie the game with 5 runs scoring, only two of which were earned. After a scoreless 8th, the Hawks fought back in the top of the 9th, starting with a first pitch hit batter. Clayton Loranger got plunked in the neck, but aside from the left fielder’s grumbling at the pitcher’s arm, Loranger was ok to stay in the game and run. A pair of back-to-back wild pitches moved Clayton around to third before Kelly Corl hit a sacrifice fly deep enough to score the go-ahead run. With the Hawks looking for insurance, both Tom Poole and Emiliano Gonzalez walked before Victoria brought in a new arm. Two batters later Jack Gurevitch nailed a single to score Poole, and the Hawks headed to the bottom with a two run lead.

Michael Gill had already been in the game for an 1.1 innings, but manager Kelly Stinnett trusted Gill with the 9th. The first Cats batter flying out to right was promising, but what was a bang-bang play at first was judged in Victoria’s favour by the umpires. Another ground ball got through the gap for a second Cats baserunner, and it was tense as a ball hit to second ended up as a fielder’s choice. The grounder was tough to play for Gonzalez, and by the time he caught the hopping ball, his only solid play was a force at second base. This split the Victoria runners to the corners, and while a single allowed the HarbourCats to bring the game within one run, it also put a crucial runner on second base. With a 1-2 count against the HarbourCats’ last-chance batter, Gill whipped around to throw the ball to second, catching the leading runner stranded off the base, and Corl expertly laid the tag to put the game to rest.

While it was a thrilling back third of the game, the Riverhawks had plenty of early excitement too. Scoring in each of the first four innings, the Hawks seemed unstoppable in the first half. In the 1st, Loranger, Corl, and Will Gardner hit back-to-back-to-back singles to lead off the game, with an Alex Stinnett double scoring the second run. Loranger played hero again in the 2nd, smacking a deep solo home run to right field. The 3rd’s three runs came off a Gurevitch double, a wild pitch, and a Mark Ossanna single. The 4th inning’s lone run came from a heads-up play, as when Gonzalez ran to steal second base after a single, Kelly Corl took off from third as soon as the ball left the catcher’s hand.

A majority of Victoria’s runs came at Edmonton’s misfortune, in the 4th it looked like Loranger was about to rob a home run, but the ball drifted down slightly and bounced off the heel of his glove over the fence, ensuring the two-run shot. Similarly in the 7th, three of the five runs the HarbourCats would plate to tie the game came across unearned. An almost assured inning-ending grounder was hit to second base, but the ball was bobbled, and all runners stood safely. Similarly, another misfortunate play was a single getting past both Gurevitch and Korl, and the attempt at getting a ball to third for a tag play was instead sailed into the dugout.

Thankfully, the Riverhawks stayed on top and were assisted through the whole game by three pitchers. Starter KJ Ward was effectively wild, walking 7 batters, but only blemished by 4 hits over 5 innings, including the Loranger-assisted homer. Lincoln Butt pitched a scoreless 6th marred only by a walk and HBP, but the troubled 7th inning dragged on long enough for Butt to be replaced. Gill earned the win with 2.1 innings of work, and both runs scored against him were unearned.

The series continues in Victoria tomorrow night and if the Riverhawks can pull off another win, they’ll guarantee their place in the 2022 WCL playoffs. Seeding and opponents likely aren’t to be decided until after Sunday’s games, but the Riverhawks are tantalizingly close to extending their inaugural season.