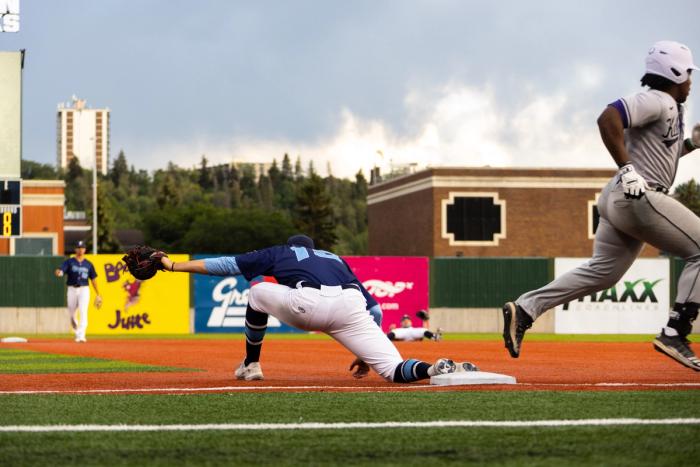 Tonight’s game was wild, with the Edmonton Riverhawks at one point being down by 15 runs, but within the last two innings being able to turn it into a 13-17 loss to the HarbourCats, nearly coming back in the 9th.

The first half of tonight’s game was fully in the Riverhawks’ control. Scoring a pair of runs in the 2nd inning, Brandon Loeppky’s arm kept the Hawks in the lead as he escaped a few jams in his first four innings. While it would end up being Loeppky’s longest appearance of the season, the righty would struggle in the 5th, giving up a single and a walk before a double steal and a single tied the game. After Loeppky came Matt Masciangelo who had issues with control. He walked two, hit two batters, and allowed a single before the Hawks could get out of the 5th, but things only got worse from there. Masciangelo worked two quick strikeouts regaining the zone, but a pair of singles followed by a home run started the 6th inning damage. A walk and an error gave the Cats another couple of runners before Brad Jolley was brought in. A single, then a three-run homer off Jolley sunk the Hawks further, and after loading the bases on a pair of walks and a HBP, they were finally out of the 6th. The 7th inning went about as well, as back-to-back doubles led off the frame scoring one, and a HBP and a walk loaded the bases with no outs. At this point, manager Kelly Stinnett swapped Jolley for then-second baseman Will Gardner. Gardner had his own struggles as the loaded bases proved troublesome, runners scoring off a fielder’s choice and a wild pitch. A pair of singles got the HarbourCats to 17 total runs in three innings.

The Riverhawks fought back in the 8th, plating 7 runs to cut the Victoria lead in half. Loranger doubled off the second pitch he saw, Kelly Corl followed up with a walk, and pinch hitter Austin Choiunard got plunked to load the bases. RBI singles from Gonzalez and Gurevitch, as well as Jolley getting hit score a trio of runs before the first out of the 8th. A fielder’s choice scored a run, before Loranger hit a bases-clearing 3 RBI double. A similar rally sparked up in the 9th, as the Riverhawks clawed back another 4 runs to make the game competitive again. A HBP and a single got Choinard and Gonzalez on base respectively, within three pitches. Jolley walking loaded the bases, then the Hawks were gifted a pair of runs from a BB and HBP. An Ossanna single rotated the runners and another run scored off a 6-3 double play.

While the Riverhawks weren’t successful in punching their playoff ticket tonight, they’ll get another chance tomorrow afternoon. Which ever team wins the series, will also be slotted in at the 4th seed and take on the Bellingham Bells. The Riverhawks fought hard tonight, and they’ll need to do the same tomorrow!