Next Up: Curious Minds! 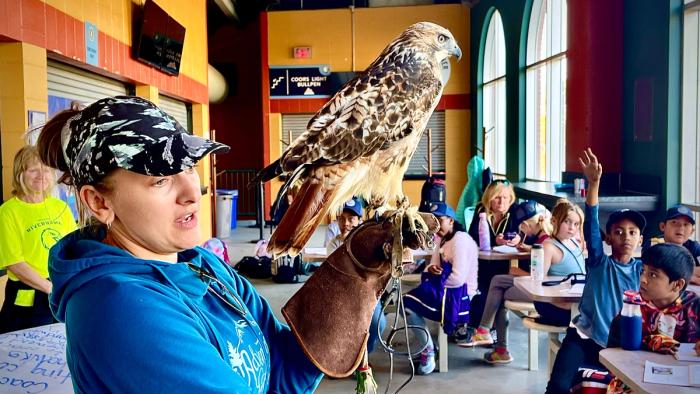 The Edmonton Riverhawks attracted thousands of parents and children to thrilling baseball games at Remax Field during the summer but this fall it became the home of an enormous outdoor classroom where it was the students' turn to play the game.

The stadium is doubling as an immersive, multi-sensory based learning experience that was a hit for kids.

“We’ve done some catching, running, and now we’re playing a little game with some of the Riverhawks players,” explains Scarlett, a Grade 4 student from St. Pius X in Edmonton. “We each have three bats, and whoever can hit the ball into the net three times in a row, we get to high-five!”

Scarlett’s class is part of a hands-on educational pilot project with the Riverhawks organisation and schools that centres on inquiry-based learning. Here, the students learn the valuable skills of how to play baseball. But that’s not all. The inspiring program covers a lot more bases.

“There are just so many fascinating things going on here, such as the history and the geography,” explains teacher Kathy Gregg, who launched the idea of the Riverhawks Inquiry “Baseball School” at Remax Field in the community of Rossdale.

The Inquiring Minds method of teaching is a world-renowned innovative approach pioneered by educational experts in Calgary in the 1990’s. It focuses on “learning by doing.” Lessons in Inquiry School meet curriculum expectations, are learner-led and moved out of the traditional classroom over the course of the week. Students and teachers use a new location to ask questions, engage in journaling, take part in creative and physical activities and tour the unique environment.

Kathy and fellow teacher Lori Bosworth were impressed with the benefits of other inquiry schools in the city and pitched the idea for one with the Riverhawks. “There are over ten Inquiry Schools in Edmonton,” says Kathy, “including the Museum School, Fort Edmonton School, Edmonton Oilers Ice School. Program organizer Linda Hut was at the City Hall School for many years and she essentially became our mentor. We approached her and she came down to the River Valley with us with another teacher that had done the Ice School. We explored the area together and she just thought, “This is such an amazing place to do a school like this.” So that's how it all started.”

While the Riverhawks Inquiry School pilot project was put on hold during COVID, it swung into action this fall, providing unique experiences for students like those from St. Pius X.

“Instead of reading about Confederation for Alberta, you can come down to the spot where it actually happened,” reflects Kathy. “ Some of the inner city kids don't get out of their neighbourhoods and coming to the Riverhawks stadium, seeing the River Valley and learning about the history of it is so valuable. The kids also did a river walk with Indigenous consultants a few weeks before they came so they got some important background information.”

The ballpark is located near the area that was the home of the Cree and the Blackfoot, right across the North Saskatchewan River. On this day, the St. Pius class visited the sacred Indigenous burial grounds down the street from the field. They also learned about the early settlers including the Metis, French Canadian, English and Scottish fur traders. They recorded facts and names in their journals from the interpretive displays and discussed what they read.

Scarlett chose to replicate in her book “Chief Lapotac, 1861.” Andrea, a fellow Grade 4 student says “I wrote down Sophia Bird who died in 1873 because I thought her name was interesting, and I love birds.” She adds, “After that, I looked around, and I admired all the other names.”

“It’s been very powerful learning about First Nations, connecting it back to the 1800’s, the Indigenous peoples and the Truth andReconciliation that we just had,” says St. Pius X Grade 4 teacher, Rosa McCormack. “And the students were very moved and talked about how it would feel if someone told them they had to do something differently, if they couldn’t eat the food in their culture they grew up with, or dress a certain way, or couldn’t practice their culture.”

“I think it’s a very memorable and meaningful that the kids will think of those who have been here before us, that’s what we’re hoping," says Riverhawks Inquiry School Teacher Terri Elliott, who leads the learning on-site. “It all fits into our program's major theme of “Home” - who was this home to then and who is it home to now.”

The students were warmly welcomed to the home stadium of the Riverhawks, spending two days in October at the ballpark exploring and learning. They will return again in the spring when the excitement of the game season starts up. These past few days were packed with activities that covered many different subjects. The lessons were carefully planned by Lori and Terri, who has years of experience as an Inquiry School teacher. They consulted with the participating teachers for feedback along the way.

“With social studies, there’s the history of the area, tours, reading maps, and finding seats in the stands. The students will use maps to find the players’ hometowns in Canada and the United States, as well as where all the baseball teams’ cities are located in the West Coast League," explains Terri.

"Another focus is on Career Pathways,” the teacher adds, “which is an Edmonton Public Schools initiative whose goal is to provide career exploration opportunities and hands-on experiences to students in an easy, accessible way. The kids get to interview a variety of employees at the ballpark and discover how their education and experiences led to career and job opportunities that the students may explore some day.”

Students use journals to write questions, take notes, sketch, and make observations. “We keep things moving; and try not to sit too long in one place,” adds Terri. “We like to get in as much as we can at the ballpark and surrounding areas as the day goes by very quickly.”

This week, the St. Pius X class also got a music lesson in singing “Take Me Out to the Ball Game,” met Riverhawks players and toured the locker room, and had a one-on-one discussion with the Riverhawks hitting coach Jake Lanferman, quizzing him about the perks and challenges of his career.

There was an exciting up-close visit from a real live hawk from the Strathcona Raptor Centre. And at home base, on the field, the students were thrilled to hang out with the Riverhawks mascots River and Kid, who swooped by to run the bases and give out hugs.

“Kid and River are really funny! I like them both,” laughs Scarlett. For this young Riverhawks fan, the whole Inquiry School experience has been a win-win. “When you’re outside, you get more energy; it helps you be more active and it helps your brain think.”

“Oh it’s been amazing,” adds teacher Rosa McCormack. It’s brought a lot of kids out of their shells, to have confidence in themselves to ask questions like they have the past few days, that they wouldn’t do in class. But they are really opening up. And we bring a lot of things back to the classroom. For example, we are learning place value in math, so I had them do their baseball jersey numbers in standard form.”

She adds, “The kids love their sports, this has been fun for them. Most of our population at our school is actually from Eastern Africa so their choice is always soccer. But getting to know this North American sport immerses them into our culture, so there’s that piece, too.

Plans are in the works for the next phase of their Riverhawks Inquiry School experience. Terry, Kathy, and Lori are packing bins with baseball books, and baseball equipment for the teachers and kids to take and talk about over the winter.

The students will return for a couple of days in the spring and play kickball games on the field. They will also have access to the press box and announcers, learn how to read a schedule, look at player stats for math, plus a lot more. The students are also thoughtfully putting together care packages in the off-season to send to players who are back at their NCAA schools in the United States.

“We’ve had such positive feedback from the teachers of how much they enjoy the program and it’s great that the students get the bigger picture of what really goes on behind the scenes of a baseball team,” says Terri. They plan to build on this year’s success and hope to extend the program from four to ten schools next year. The Edmonton Riverhawks are looking forward to hosting more teachers and enthusiastic students at their stadium in 2023!

For now, it looks like the Riverhawks mascots River and Kid have made some long-lasting friends…and fans. “I told my daughter we’re coming to watch the collegiate teams playing here right now,” smiles Grade 4 teacher Rosa. ”But these kids are already asking me, “Can we come and watch a Riverhawks game in the spring?” That’s the goal, to make it happen for them, because then it all connects.”

If you’re interested in your class taking part in the Edmonton Riverhawks Inquiry Baseball School in 2023, we’d love to hear from you! You can find out more information by emailing admin@gohawks.ca!